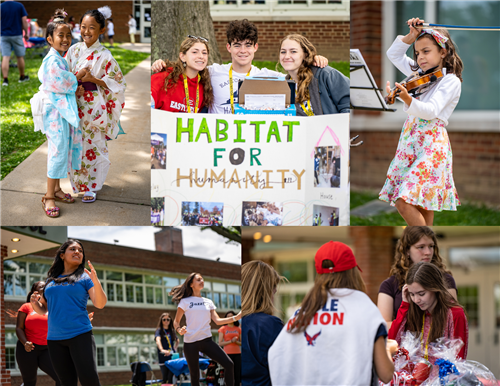 Swirling winds did little to stifle the enthusiasm of the crowd on Saturday afternoon, as families strolled through the Eastchester Middle School parking lot, helping themselves to the ample food offerings, playing carnival games and watching students of all ages take center stage with musical, vocal and dance performances.

The first-ever “We Celebrate Eastchester” Block Party, held on June 18, was a rousing success by all accounts, a fitting tribute to Eastchester and its citizens who turned out in droves to celebrate the town and the community they hold so dear.

Eastchester Middle School teacher Cara Dippolito, who played an integral part in getting the event off the ground, said that although she had concerns about how the event would be received by the public heading into the weekend, those fears were quickly assuaged by a strong early turnout.

“We had a full parking lot by 11:30, we had a nice flow, but it never felt overcrowded,” said Dippolito. “I was really thrilled; It went better than I ever could have hoped.”

Dippolito credited much of the day’s success to the efforts of community volunteers and the Eastchester custodial staff, but said the true highlight of the day was involvement of various student groups and the general feeling of camaraderie that pervaded the event. The idea for the Block Party initially sprang from discussions by the Diversity, Equity and Inclusion Task Force, and Dippolito said that she believed that message of unity shone through on Saturday.

“The people that attended seemed really happy, the kids had a blast,” she said. “You don’t always know how people are going to interpret your message, but we wanted to convey a positive message of celebration and I think we really did.”

Based on early positive feedback, Dippolito said she hopes to make the “We Celebrate Eastchester” Block Party an annual event, a true staple of the community. Urged on by outgoing Superintendent Dr. Robert Glass—who will be leaving the district on July 1—Dippolito said that she believes that members of the DEI Task Force and fellow teachers will look to find ways to keep the event going while finding new ways to reinforce the message of the celebration.

“Even though he’s leaving, Dr. Glass wants to make sure this keeps going, so we’re going to keep going with it; If we can keep this same momentum, the future looks pretty good,” said Dippolito. “I’m already racking my brain for ways to refine it and do a better job.”