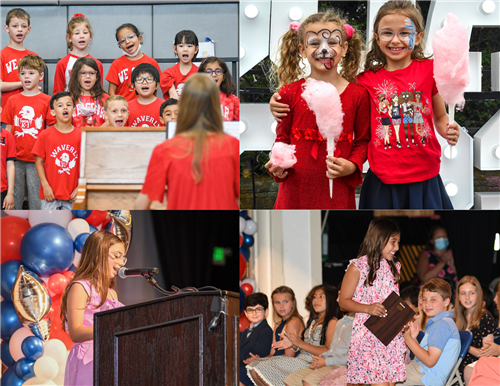 Parents toting cameras and beaming with pride have been a constant sight on Eastchester campuses recently, as the end of the school year brings with it ceremonies commemorating the achievements of students ready to take the next step in their academic journeys.

The Eastchester High School commencement might not take place until June 24, but the district’s younger students have already celebrated their own accomplishments in a trio of “Moving Up” ceremonies over the last week.

On Thursday, June 16, Waverly’s first graders became the first district students to officially celebrate their promotions, taking part in a graduation concert that also served as the students’ first live recital of the year.

Waverly Principal Vidya Bhat read a poem to the outgoing students, reminding them of all the opportunities they will have to grow.

“You’ve learned so many things throughout the year and you’re ready for Grade 2, have no fear,” said Bhat. “A lifetime of learning has only just begun, incredible things are in store for you, and much more fun!”

On Tuesday and Wednesday, fifth graders from the Greenvale and Anne Hutchinson schools followed suit, celebrating their promotion to the Eastchester Middle School with a pair of events held in the high school auditorium. Superintendent Dr. Robert Glass was on hand for both ceremonies and his message to the rising sixth graders was clear: although leaving elementary school might seem like a daunting proposition, the last four years have prepared these students well, giving them the tools they will need to thrive as middle schoolers.

As these soon-to-be sixth graders face new challenges, he added, they will always have the full support of the Eastchester community.

“You’ve got this and we’ve got you,” said Dr. Glass. “The middle school teachers and staff are excited and will make this fun and easy for you!”